How is the Gulf of California Marine Program, in collaboration with the World Wildlife Fund Mexico, monitoring the use of marine protected areas (MPAs) by iconic megafauna such as the endangered Gulf Grouper (Mycteroperca jordani)?

The answer is by using multiple methods. We are using long-term diver survey, acoustic telemetry, and passive acoustic methods to monitor the activities of Gulf Grouper and other megafauna within MPAs.

Since 1999, the Gulf of California Marine Program (GCMP) has conducted diver surveys as part of the Ecological Monitoring Program to monitor the rocky reefs of the Gulf of California and record observations of every fish and invertebrate encountered, surmounting a large database of long-term data. One of the most relevant achievements of the Ecological Monitoring Program has been the documentation of a large increase in fish biomass within Cabo Pulmo National Park since its establishment (Aburto-Oropeza et al. 2011). This includes the return of top predators, such as the Gulf Grouper, that are highly prized within the park as an indicator of success and draws in SCUBA ecotourism, which now sustains the community. Repeated observations of Gulf Grouper within Cabo Pulmo National Park indicate that this MPA is a great place to study the life history of this endangered species in a well-protected area using acoustic telemetry and passive acoustic techniques. 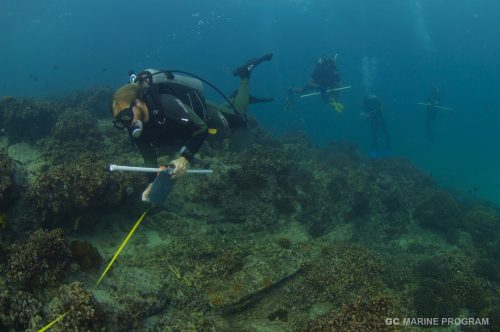 Starting in 2013, and now with new support from WWF Mexico, GCMP’s researchers expanded their efforts to monitor patterns of Gulf Grouper habitat use, movement, and reproduction – information that is largely unknown since much of the population met its demise by the 1960s (Saenz-Arroyo et al. 2005) – with the goal of better understanding the importance of MPAs for top predators and megafauna. The GCMP installed an array of 11 acoustic telemetry receivers throughout the park and tagged 19 Gulf Groupers with acoustic tracking devices to monitor where individuals were spending their time within the park, determine if there were “hotspots” of residency, and document movements within and outside of the park. The acoustic tags attached to the fish emit ultrasonic signals that are detected and recorded by the acoustic receivers, allowing researchers to know exactly when and where a fish is, assuming they are within the range of an acoustic receiver. To date, researchers have collected invaluable information about how Gulf Grouper are using Cabo Pulmo National Park.

What have diver surveys and acoustic telemetry told us so far?

The cumulative coverage of both diver surveys and acoustic telemetry receivers have allowed us to have a good picture of how Gulf Grouper is using different reefs within Cabo Pulmo National Park (see Map 1 for the locations of surveys and receivers). The combined efforts of diver surveys and acoustic telemetry detections have shown that Gulf Groupers have favorite locations within the park. Diver surveys predominantly observed Gulf Grouper at the sites of Los Morros, El Bajo, El Cantil, Esperanza, and Potanco (see Map 2) – all rocky reef sites. Detection of tagged Gulf Grouper also follow similar patterns with most occurring at Los Morros, El Bajo, El Barco, and El Cantil (see Map 2). Repeated observations and detection at these sites indicate that Gulf Groupers likely exhibit a high level of residency at select sites. This finding supports the protection of favorable rocky reef habitats, such as the ones found in Cabo Pulmo, to help reduce fishing mortality and restore the species to its pre-endangered status. Future work will help determine if the abundances and presence at different reefs expands with continued protections.

Knowing that Gulf Groupers spend a lot of time within Cabo Pulmo National Park, we wanted to know if they were reproducing within the park’s boundary, since successful spawning is key to the restoration of the Gulf Grouper population. Like most groupers, it was thought that Gulf Grouper likely formed spawning aggregations, which occur when a regional population gathers at a specific location and time to reproduce. Additionally, since a number of grouper species also produce sound during reproductive periods – yes fish make noise -, it was also believed that Gulf Grouper probably made a lot of loud sounds during spawning events. To test these beliefs and see if there was spawning within Cabo Pulmo, passive acoustic instruments were deployed at locations with a high probability of spawning activity. The passive acoustic instruments that were installed included long-term acoustic recorders equipped with hydrophones – underwater microphones (See photo below). The hydrophones have been continuously recording underwater sounds at the reefs within the park with the hope of capturing the love songs produced by male Gulf Groupers during reproduction.

Were we successful in recording sounds and observing spawning? You will find out shortly – stay tuned to learn about our exciting discoveries in our next blog…

Saenz-Arroyo, Andrea, et al. “Rapidly shifting environmental baselines among fishers of the Gulf of California.” Proceedings of the Royal Society of London B: Biological Sciences 272.1575 (2005): 1957-1962.

Timothy Rowell PhD student, SIO  Timothy holds a master’s degree in Marine Sciences from the Universidad de Puerto Rico Mayagüez and is currently pursuing a PhD in Marine Biology at SIO under Dr. Octavio Aburto.  His research involves using a suite of acoustic technologies to characterize fish spawning aggregations in the Gulf of California with an end goal of enhancing information available to stakeholders and resource managers.  He is currently studying spawning aggregations of the Gulf Corvina (Golfo de Santa Clara) and Gulf Grouper (Cabo Pulmo) in partnership with the Gulf of California Marine Program.

Dr. Octavio Aburto Assistant Professor, SIO  Dr. Aburto has focused his research on the ecology and reef fishery in the Gulf of California as well as the management of protected areas in the region. He has led several scientific projects in partnership with multi-leveled governments and stakeholders across different sectors. Dr. Aburto currently coordinates a group of undergraduate and graduate students from the UABCS and SIO who investigate the importance of coastal habitats.