In November 2018 on an expedition coordinated between the University of California and the San Diego Natural History Museum, I, along with a team of over 20 interdisciplinary scientists, visited 14 of the southern gulf islands aboard the Searcher as part of an interdisciplinary research effort to document the island biogeography of the region. Table 1 at the bottom of the page outlines the ten main islands we visited and includes information on the history of the island (the importance of which you can read about in my last post). Here I am going to spotlight four of these islands, and some of their unique features.

San Francisco island, the first of our expedition, is located 79km North of La Paz and is easily identifiable from its unique sickle-shape. The shape formed during a sudden volcanic explosion, followed by collapse leaving behind deep circular crater with marked edges, known as a caldera. In the case of San Francisco Island, the crater eventually filled in with ocean water, forming a scenic and protected bay. During our short two-hour visit, the botany team collected over 60 plant specimens, of which nine were new records for the island. 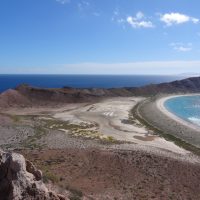 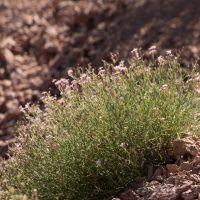 San Marcos island is found 175km southwest of Santa Rosalia and is a combination of volcanic and gypsum rock. Gypsum is a type of sedimentary rock that formed millions of years ago by the dissolution of calcium and its subsequent re-crystallization in the form of calcium sulfate, called gypsum. San Marcos is the only island in the region with large gypsum deposits. There is a small town on San Marcos with around 425 inhabitants that lives around the mining of gypsum rock. In fact, it is the second-largest gypsum mine in the world. The material is exported, to be used for making plaster and drywall.

There are native mammals known to the island, including the Isla San Marcos Spiny Pocket Mouse (Chaetodipus spinatus marcosensis), pictured below. However, San Marcos is also home to feral cats, dogs, and goats. These introduced animals often have negative impacts to the native island biota. 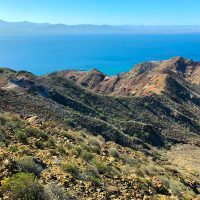 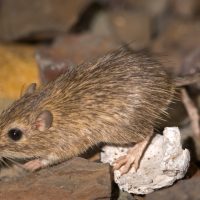 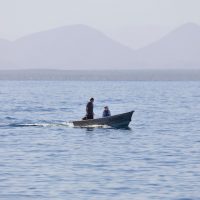 The northmost island of our expedition, Isla Tortuga is a small, but memorable spot. Despite its small size, climbing the rugged terrain of the island poses a real challenge. However, if you can overcome the thickets of cacti, heed the warnings of the rattlesnakes, and climb the steep unforgiving rocky terrain of Isla Tortuga, an incredible view awaits. At its center lies an enormous crater formed from a massive volcanic eruption.

Tortuga possesses one of the highest concentrations of rattlesnakes (Crotalus sp.) anywhere. In a single day’s hike, our team collectively encountered dozens of them. Luckily, they give plenty of warning with their clear, distinctive rattling.

Despite its hot and harsh terrain, Tortuga is lush with life. In some of the more rugged faces of the island that experience harsher climatic conditions, various plant species congregate and grow in dense patches called hummocks, all mutually benefiting from the creation of a micro-climate that protects from the surrounding harsh desert climate. 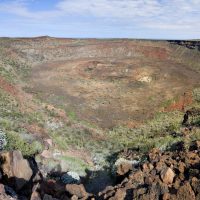 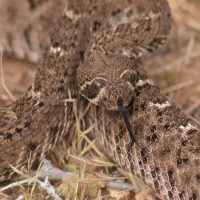 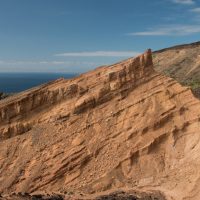 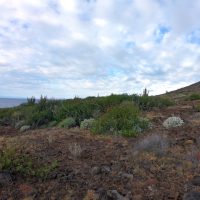 In addition to its geologic history, Carmen Island, just 17km from Loreto, also has an interesting human history. As you hike along the island, you readily encounter remains of human activity, both new and old. Walking across the coastal sand dunes up into the mountains, it is impossible not to encounter extensive shell middens from early humans. These middens are not only anthropologically important, allowing scientists to learn about the human history of the region, but also botanically important. Due to their high calcium content, shell middens allow a high diversity of cacti to grow and thrive compared to the island’s natural sediment.

In the more recent past, there was also extensive salt production on Carmen. Today you can see remnants of these salt ponds among the copper-red mudflats that divide the dunes of the island from its mountains. In the mid-1800s a Russian colony located in Sotka, Alaska depended critically on the salt from Carmen for the preservation of furs. The Russians would send a ship down to Carmen to export its salt to their colony every three years.

Today, Carmen Island is home to a large population of big horn sheep (sp.), native to the Baja California Mainland, but recently introduced to the island. Some of these individuals are used in conservation efforts to repopulate the mainland, while the rest remain residents of the island, occasionally hunted by people who pay up to $200 thousand dollars for a permit to hunt a single individual. The Carmen big horn population appears to be thriving, but what the impact to the native flora of the region remains to be fully understood. 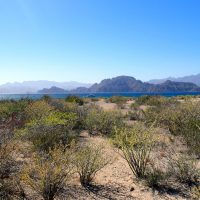 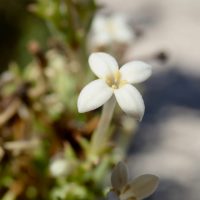 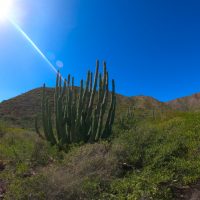 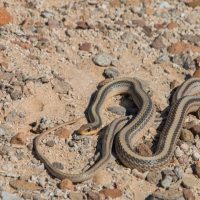 Table 1 – Island name, primary geological origin, and type of connection to the mainland. An additional three smaller islets were visited, but not included in this table. They are Roca San Marcia, Las Galeras, and Isla San Cosme.