Earlier this year, researcher Andrew F Johnson was invited to join a cruise run by Prof. Jim Barry and the Monterey Bay Aquarium Research Institute (MBARI) exploring the deep canyons in the Gulf of California. The cruise lasted for 10 days and visited deep-water sites from outer Cabo Pulmo to Isla Tortuga and Isla Angel de la Guarda. The aim of the project was to explore how species assemblages change with depth from deep to shallow waters through a range of oxygen concentrations within the Gulf. After ten longs days, hours of video footage and kilograms of sediment core samples the team arrived back in La Paz, exhausted but excited to explore their data and see what the expedition reveals about biological patterns in the Gulf. Below we hear about Andrew’s experiences on the MBARI cruise:

Recently I was lucky enough to be invited onboard MBARI’s Western Flyer for a cruise to explore the deeper waters within the Gulf of California. Here are a few daily logs from my trip describing what life at sea is like and what the research was all about…

Time to say goodbye to my comfortable bed for 11 days. Its time for the MBARI’s RV Western Flyer cruise in the Sea of Cortez/Gulf of California. The Flyer has been out for the last 6 weeks off the Baja peninsular exploring the deep and tomorrow will set sail from La Paz for its 4th leg of a 3-month-long campaign. This leg is run by Chief Scientist Jim Barry and aims to explore the Oxygen Minimum Zone (OMZ), areas of the ocean where oxygen saturation is at its lowest. Today, however, it is just packing bags, making cabin beds and meeting the crew.

Well, looks like I didn’t have to say bye to a comfortable bed after all. My cabin seems like a luxury, and a whole lot better than the smelly fishing boats I have been used to in the past. My cabin mate for the cruise is Patrick Whaling, an MBARI veteran with over 27 years at the Institute and over 350 research cruises. A good guy to have onboard. Today was an easy one, cruising north to our first sample site next to Isla Tortuga. Knute Brekke MBARI’s chief ROV (Remotely Operated Vehicle) pilot also taught the new scientists onboard how to use the ROV’s camera system (which thankfully looks more complicated than it is), a tour of the ship and its safety protocols and some restaurant quality food provided by the relief steward (Eric Fitzgerald). Tomorrow, all being well we should arrive at Isla Tortuga early and then get set up for our first day of sampling.

Up early this morning to watch the sunrise and our approach to Isla Tortuga for our first day of sampling. I was lucky and got some sleep but it seems that after a previous bumpy truck ride MBARI’s Benthic Respirometer System (BRS) was not in such a good state last night. Circuit boards rattled loose meant Jim Barry and his team had a later night than most of us. The BRS is the main bit of kit we’ll use on the cruise. It is an eight-chambered experimental system that allows Jim to change the pH and oxygen saturation of separate compartments that sit within a huge frame (that hopefully lands where the team want it on the sea bed). Ultimately, Jim is interested in how animals from different areas of the deep sea can respond to differences in pH and Oxygen concentrations. Each chambered is “implanted” with a species caught using the Doc Ricketts ROV and then the experiments begin – measuring the oxygen consumptions of each chambered animal along with simulations of ocean acidification and low oxygen conditions.

The BRS was released for the first time and all seemed to be going swimmingly, until we hit the bottom that is and couldn’t manage to find many batfish (Dibranchus sp.) (Jim wants these as they are easy to catch with the slurp gun and make for good specimens to use in the BRS). So instead it was time to test the ROV pilots – shrimp catching time! Amazingly the guys managed to do it although it took slightly longer than expected with a few tense moments watching shrimp bounce around the rim of the chamber, attempting to escape. Once filled the BRS stays put normally for more than 24hrs. Then it was time to start the ROV transects which run from deep (approx. 1200 – 1500m) to shallow water, through the OMZ. Collaborating scientist, Natalya Gallo (Scripps) is researching how the community composition of fish change as we move from deep to shallow water, through the OMZ. By the end of close today we had only managed to creep halfway back up the slope (to 600m). Then it was time to unload the ROV of all of its core samples and collected specimens to start sieving, sorting and preserving. Although its pretty messy, its fun working through the samples seeing what surprises the deep sea has to offer, whether it be colorful polychaete worms or alien-looking fishes that seem almost prehistoric.

Image of the screens in the viewing room from the ROV deployment. – Andrew F Johnson

Up early this morning to watch the ROV dip back into the water to finish the transect from yesterday, up the slope back out of the OMZ. It was great today as we seemed to hit a patch with a lot of fish, which always makes for good watching. Had a long go on the camera and the ROV drivers did well not to scold me considering my poor efforts at keeping the camera in focus and in the right place during the coring operations. In the evening we hit the button for the acoustic release on the BRS and with a sigh of relief everything went well and the BRS was on the surface 35 minutes later, still containing the shrimps we had caught more than 24hrs before. Jim snuck off to download the preliminary data from the BRS whilst the lab crew set about sorting more samples followed by bed.

The team had a few issues with the BRS yesterday so that wasn’t deployed today. Jim set about fixing a few things whilst the boat headed to the Salsipuedes basin (a very low oxygen area) for some more close-up and fish transects, looking at the epifaunal and fish communities as we move up the slope through the OMZ. Unfortunately, the currents here are incredible (hence the name: sal = leave, si = if, puedes = you are able) continued to pick up during the dive until the visibility was so bad that we couldn’t continue working. So it was a half-day with the ROV transects and the evening was easy as the short dive meant there were few samples to sieve and sorting. Early night for all instead, which is never a bad thing!

We re-deployed the BRS today at San Pedro Martir. This is a cool island that looks like a crocodile lying flat in the water with a spine of cacti. The ROV pilots managed to load the chambers really quickly, this time it was filled with eight small file-tailed catsharks (Paramaturus xaniurus)! Here the Oxygen profile of the water was really different. Much higher oxygen levels here than Salsipuedes basin. Also a great days diving with almost no currents and great visibility. Today the ROV travelled from about 1200m depth up to 200m and the difference in diversity and community assemblages was amazing. We had a late evening in the lab, which was nice as we had so many samples and fish catches to sift through. Always better seeing things up close than on a computer screen.

Today we were back to Salsipuedes Basin – this time 30 miles north of our tough dive site the day before yesterday. This time we got lucky. The currents were better and the visibility was good. By the time we got up to the shallows, close to the island (400m) the ROV was travelling across boulder fields covered in bright yellow and white sponges decorated with so much life it was almost unbelievable. A stark contrast to some of the more muddy, bottoms we have had which generally have a smattering of brittle stars and a few fish. Really interesting diving today. The lab work again was great as there was a lot of animal life in the samples and everyone was in high spirits after a day of colorful diving.

Today was a travel day – just steaming South past La Paz to our penultimate field site – the Cerralvo trough.

As usual it was BRS deployment followed by ROV transects moving up slope from deep to shallow water. Everyone is well in the swing of things now and operations are running smoothly. Seemed as though we saw a bit more invertebrate diversity today, although its tough to say when every day is such a mix of species, sea bottom types and varied currents and visibilities.

Things felt familiar today as we were stationed off Cabo Pulmo heading up a steep canyon which points directly into the marine park. Whilst we were sampling some of the crew headed out for some maintenance checks of the rib and a quick snorkel in the shallows over the reefs. As expected they all came back to the ship raving at how amazing both the water and village of Cabo Pulmo is, something many of the GCMP are lucky enough to experience on a regular basis. Knowing the benefits for the GCMP, Jim was keen to really cover a lot of ground and by end of close today we managed to travel from 1400m to 200m and have a good look around in the shallower waters. Although we did see a lot of new species for this trip, the best bit for me was travelling with the ROV over these huge underwater dunes that follow the same patterns as the more inshore basaltic dykes that make up the reefs of Cabo Pulmo. Unfortunately due to diving and tour operating duties David Castro and his family didn’t make it out to the ship, but soon enough I’ll be sending them some photos so they can see what is in their waters, but too deep to dive using SCUBA.

Homeward bound today. Picked up the BRS on the way back to La Paz and that was our most successful deployment which was a great way to end the trip. We were back in La Paz by noon, which meant a quick swim and unloading of all of the gear, ready for a meal a beer and bed. To find out more about the Sea of Cortez 2015 campaign you can check other blogs and findings on the MBARI website. 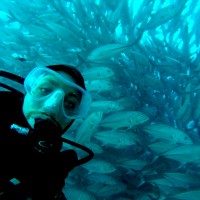 Postdoctoral Researcher at SIO. Dr. Johnson’s research focuses on the impacts of marine fisheries on fish populations and habitats. Since beginning his studies in marine biology in 2002, Dr. Johnson has traveled extensively, working with nine different fisheries in six countries gaining valuable experience in a range of fishing methods and management strategies. His doctorate at the School of Ocean Sciences, Bangor University (UK, 2012) focused on determining the habitat requirements of demersal fishes and how this knowledge can be used in MPA design. He is passionate about integrating sound ecological knowledge of fishes and ecosystems with the behaviour and patterns of fisheries in order to help predict the future impacts of current exploitation levels. He aims to use such synergies to aid the Gulf of California Marine Program in the design of future, sustainable management strategies for Mexican fisheries.