Blood oozing from our shins and forearms. Spines nestled into clothes and skin. 50-m measuring tapes in shreds… A notebook full of data. This is the face of research in the matorral árido espinoso – spiny desert scrub – a previously undescribed vegetation community found only on the stabilized sand ridges of Punta Arena, Baja California Sur.

At the peak of the vegetation’s response to the late summer rain, we had the opportunity to continue our research into the little known flora of Punta Arena. This magnificent mass of sand juts into the Gulf of California right at the Tropic of Cancer and just north of Cabo Pulmo. Our research in the world of spiny plants all started during a biological expedition to document the, at that time unknown, terrestrial biodiversity of the Cabo Pulmo region. A team of 21 interdisciplinary researchers from the U.S. and Mexico documented over 550 plants and animals in this area, of which more than 100 are endemic to the Cape Region. Beyond that, it became clear that the area of highest biological and conservation importance was Punta Arena. Contained within the 11 square kilometers of these stabilized sand dunes are two unique habitats, three micro-endemic plant species, threatened species of shorebirds and waterfowl, and nesting sea turtles.

Recently we returned to the southern edge of the Sonoran Desert in Baja California to better understand and quantify this unique zone. How does the diversity and abundance of these beach ridges compare to marine (fish and invertebrate) diversity and abundance of the Cabo Pulmo Reef? To address the terrestrial side of this question and begin linking our knowledge of the desert and sea meant getting up close and personal with a nearly impenetrable swath of shrubs, cacti, and trees. 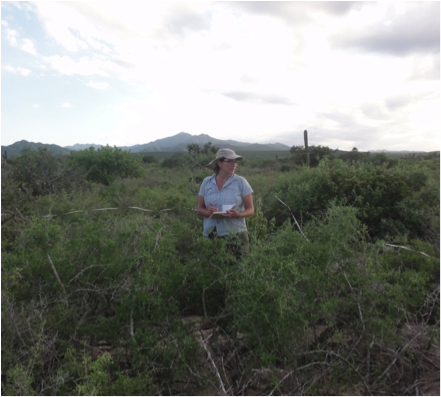 Our previous reconnaissance and first day in the field had identified what appeared to us as four distinct habitat communities within Punta Arena: shifting coastal dunes, the transition zone between the matorral and coastal dunes, the matorral árido espinoso, and the edges of seasonally flooded lagunas. For comparison and to demonstrate the unique vegetation within Punta Arena, we also sampled the surrounding matrix of desertscrub just inland. We had our hands full with just five days to accomplish our field goals, before we had to jump over to the other side of the Gulf for the 2015 N-Gen Summit.

We quantified the vegetation of each zone using an adaptive quadrat method taught to Sula by our mutual friend and inspiration Dr. Tony Burgess. The method uses basic quadrat techniques and conforms to the National Vegetation Classification Standard, it involves identifying every plant in the quadrat and quantifying it’s cover, but with each successive quadrat, the size doubles (to include the previous quadrat). So sizes go from 1 square meter to 2 to 4 to 8 to 16 to 32 and so on, until the new species added during a doubling drop to less than 10%. This technique not only gives you lots of data on plant abundance over area, but it tells you the perfect quadrat size for the habitat you are working with (provided the stand conditions are fairly homogenous). Once we had identified the ideal quadrat size, we lay an extra four quadrats within each habitat.

Now the data is in hand and the number crunching can begin. The coming months will be filled with regression analysis and other statistical approaches to see if indeed the vegetation of Punta Arena is as unique as our initial survey indicated. At the same time as our campaign, underwater transects were run by Ismael Mascareñas and his Gulf of California Marine Program team along the reefs (blog coming soon). This combined study will be the first to quantify the geologic underpinnings of biological diversity at a land/sea interface.

After our final day trudging through the dense vegetation of Punta Arena we came back to Cabo Pulmo ready for some fish tacos and a limonada. To our surprise we walked directly in to a lunch meeting of local conservation leaders and Alejandro del Mazo the Comisionado of CONANP. In our sweat stained and blood splotched field clothes, we were not prepared to meet the director of Mexico’s natural protected areas. Nonetheless, we were kindly welcomed and were able to explain a little of our research in the area and the importance of Punta Arena to the conservation of Cabo Pulmo. We hope the data collected on this trip will continue to draw attention and support wise use of this remarkable area.

Ben is a Research Scientist at the University of Arizona whose efforts focus on linking science and conservation in the Sonoran Desert. His research aims to establish ecological baselines to support conservation and management decisions. As director of the Next Generation Sonoran Desert Researchers (N-Gen) he strives to develop a conservation ethic that matches the grandeur of the greater Sonoran Desert. He has worked in the Gulf of California and its arid islands for over 10 years, expanding his research in biogeography to Cabo Pulmo in 2013.

Sula is a Biodiversity Explorer at the Botanical Research Institute of Texas (BRIT) who works to further conservation science in Baja California and across the US/MX border, where she has worked for the last 10 years. Her research is focused on coastal ecosystems and rangelands, and she is a Visiting Scholar in the Gulf of California Marine Program at Scripps Oceanographic Institute.