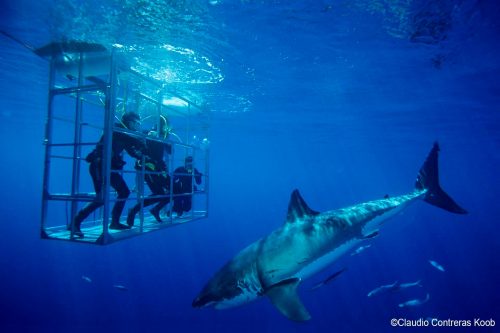 Mexico is surrounded by 11,122 kilometers of coastline where 860 sites are regarded as prime diving spots for the approximately 264 tourism shops offering diving and snorkeling trips. The economic benefits generated by these operators is comparable to that of the country’s fishing industry. According to data from 2017, both industrial and small-scale fisheries contribute, on average, 700 million dollars to Mexico’s GDP. A research project coordinated by Dr. Octavio Aburto from Scripps Institution of Oceanography at the University of California in San Diego, found that just in 2019, tourism focusing on underwater activities contributed $725 million dollars approximately to Mexico’s economy. Small businesses were responsible for $455 million of the total generated.

The numbers presented by the researchers only include payments covering diving trips and do not include payments for travel, lodging and food. Dr. Aburto points out the relevance of this comparison since it highlights that unsustainable fishing impacts marine biodiversity; while the diving sector can contribute to ocean conservation, since it relies on thriving environments where divers can enjoy them without extracting anything from them.

The research team, which also includes scientists from the Universidad Autónoma de Baja California Sur, the Senckenberg Climate and Biodiversity Research Centre, the Centre for Environmental and Resource Economics, the Centro de Investigación y Docencia Económicas, and the Centro para la Biodiversidad Marina y la Conservación, performed a search on the internet for diving and snorkeling businesses and visited tourism destinations throughout Mexico. The team mapped diving sites throughout Mexico’s coastline as follows: 48% along the Baja California Peninsula, 28% in the Yucatan Peninsula, 12% on the Mexican Pacific, an 12% in the Gulf of Mexico. 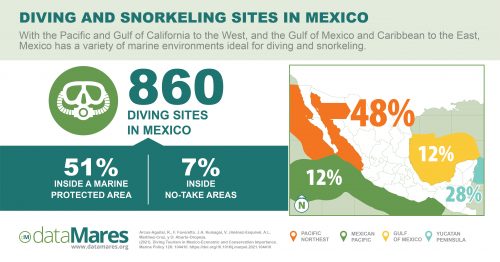 For Ramiro Arcos, author of the scientific publication, this represents a first attempt to design a strategy that incorporates tourism operators, communities, and divers in marine conservation since these actors all depend on healthy ecosystems and could, potentially, create positive impacts beyond the diving sector. According to the Convention on Biological Diversity established in 1992 by the United Nations, and which Mexico adopted, the goal is to have 10% of marine and coastal territory fully protected by 2020. Currently, Mexico only reached 5% of its EEZ protected after declaring the Revillagigedo Archipelago a National Park in 2017; its area covers 15 million hectares. 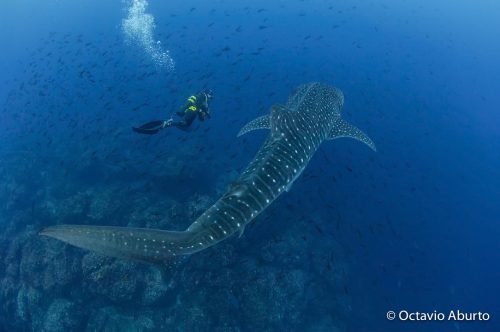 Of the 860 diving sites recorded in the study published in the scientific journal Marine Policy, 51% are located inside a marine protected area (MPA). However, only 7% of those fall within areas where all extractive activities are prohibited. Dr. Fabio Favoretto, coauthor of the publication, adds that “scientific evidence regarding the ecological and socioeconomic benefits resulting from a proper protection of marine habitats are clear; what nature needs is our commitment to allowing it to recover and thrive, and we can then benefit greatly from this.”

Documented environmental degradation highlights the importance of designing policies that not only seek to protect our natural capital, but also aim at guaranteeing economic wellbeing to the thousands of families that depend on tourism for their livelihood. The authors of this new research call on the tourism, fishing, and scientific sectors to come together and collaboratively search for solutions to the environmental problems Mexico is facing.

Today, Mexico occupies the 17th place worldwide in terms of fisheries and aquaculture production. According to statistics available through dataMares (Overview of the fishing sector in Mexico: Part I), every year approximately 73,000 fishing vessels, both industrial and small-scale, extract 1.3 million tons of seafood from Mexico’s marine territory. On average, this production generates $730 million dollars in earnings. Even with this economic contribution, this exploitation must be analyzed in terms of its impact on marine biodiversity and any negative impacts on other economic activities such as diving, adds Aburto. 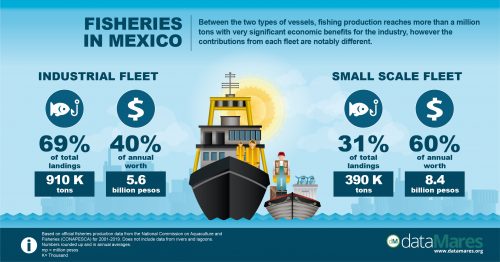 For example, according to the National Oceanic and Atmospheric Administration (NOAA), coral reefs are among the most biodiverse ecosystems in the world, and it is estimated they house more than 4,000 species of fish and 800 species of corals. In Mexico, habitat and species diversity is what attracts the 3.3 million of tourists that visit the country on average every year. 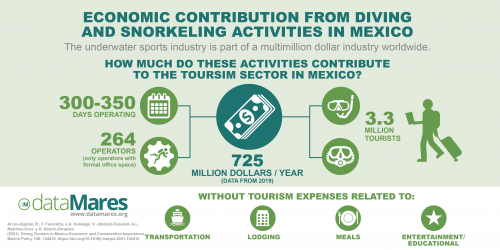 The team of researchers found that, while most of the diving sites are in Mexico’s Pacific Northwest, the majority of the divers visiting the country chose the Yucatan Peninsula as their destination, where 55% of the tourism operators that offer diving trips are located. Both regions receive a similar number of visitors, however there is a difference in business strategies. Tourists visiting the Pacific Northwest tend to prefer snorkeling; while this is a cheaper activity for the tourist, it generates higher net earnings per trip than diving. 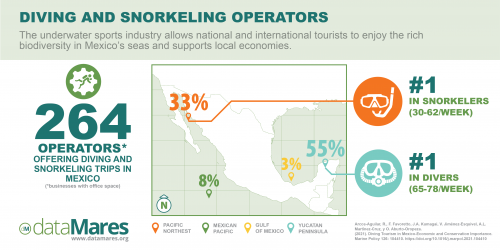 “Particularly, our research shows that more tourists don’t always mean higher earnings. A large number of tourists can represent an increase in pressure on the natural ecosystems since more infrastructure is required to sustain demand. Tourism operators in areas with high biodiversity but with small-scale operations can earn more per capita with respect to those operators tending to mass-scale tourism. Cabo Pulmo, in Baja California Sur, is an example of this phenomenon.” explains Dr. Favoretto.

In Mexico, the diving and fisheries industries go head-to-head in terms of economic contributions to the nation’s economy. Dr. Aburto and his team seek to change the paradigm behind marine conservation and see the divers, who make more than a million dives every year in Mexico’s waters, as allies to work with communities, tourism operators and fishers in protecting marine ecosystems. Octavio, who is also a National Geographic Explorer, adds: “I don’t believe this is a fishing versus diving issue, but we need to build communication bridges that allows both activities to thrive. This will require a collaborative vision, more than a competitive one.” There is great potential in generating benefits through a business strategy that promotes and prioritizes quality of experience for tourists. This can result in higher earnings, while reducing pressure on marine biodiversity.