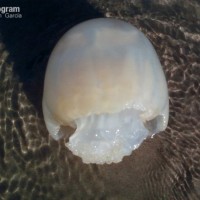 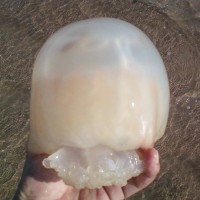 In 2012, a massive bloom of cannonball jellyfish (Stomolophus meleagris) occurred in the Golfo de Santa Clara (GSC), and local artisanal fishermen landed approximately 20,000 tons. The event lasted for around 40 days (May 24th – July 9th 2012), allowing the community to have much-needed income during a tough time of the year when fishing is usually bad because of the absence of resources. During this time, the jellyfish fishery generated approximately 3.5 million US$ in revenues to GSC’s fishermen. The bloom generated such enthusiasm that after the 2012 bloom local fishermen invested great amounts of money in infrastructure and equipment to process the jellyfish that were expected the coming year. Moreover, fisheries managers provided training courses hoping that 2013 would bring another successful jellyfish fishing season. The jellyfish, however, never arrived in 2013 and all the efforts and investments where in vain. 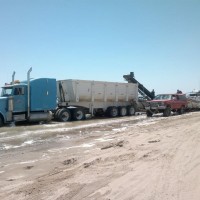 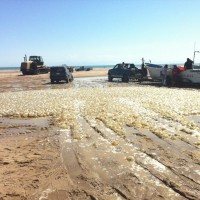 The Gulf of California Marine Program was in GSC when this bloom event began so we had the opportunity of seeing firsthand how fishing activities for this resources developed.  Because of the high catch and revenues values, we decided to take a look at the oceanographic data with the objective of determining the conditions that allowed for this rare event to occur. Through an extensive review of published literature on the biology and fisheries of the cannonball jellyfish, and together with satellite information regarding the food availability, temperature and regional currents, pre- and post-bloom, we now understand what happened in 2012. Our results from this research were recently published in the scientific journal Fisheries Management and Ecology.

The first important factor to highlight is that these jellyfish are not native to GSC, given that environmental conditions in the area would not normally allow them to fully develop and complete their life cycle. The closest place where conditions are favorable for their development is Guaymas, Sonora, where there has been a relatively stable fishery for the last 5 years. Satellite data showed that from April 20th, 2012 primary production was high (which means more food for the jellyfish) in the area near Guaymas. This also coincided with the normal spawning season of jellyfish, which generally occurs at the beginning of the summer when water temperature reaches 21 °C. Moreover, satellite information also confirmed that ocean currents took approximately 30 days to transport jellyfish and its food from Guaymas to GSC; the same amount of time it takes for a jellyfish to reach commercial size once it is born. 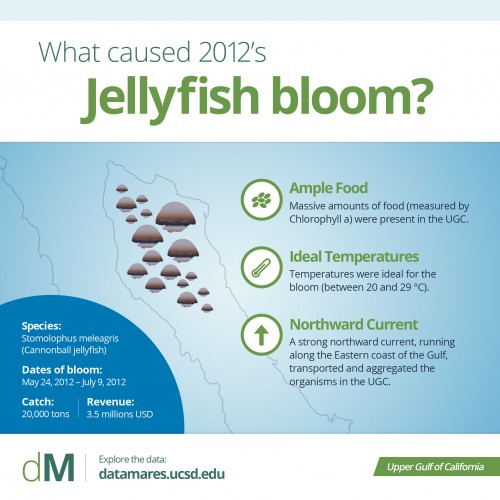 Considering that the highly productive jellyfish fishery was the combination of a variety of oceanographic factors that coincided in 2012, it is easy to understand that it is not possible to fully predict what will happen in subsequent years. By using different types of information (biology, oceanography, photography), we were able to understand that this rare event of high jellyfish abundance was the result of several physical conditions happening at the same time. Although we have tools that help us analyze oceanographic conditions, it is not possible to predict with enough precision whether or not there will be a jellyfish bloom each year. Even in places where jellyfish seem to be available every year, it is still a challenge to establish a fishery since there is no way of predicting how much jellyfish volume will be available. ?). Investing in infrastructure, equipment and training to extract resources that are generated through massive blooms that cannot be predicted is not a responsible move. This is especially true for communities which rely so heavily on marine resources as their primary source of income, such as those in the upper Gulf of California. 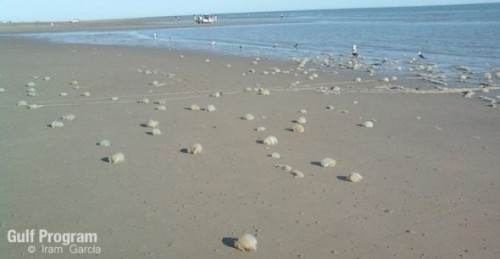 Alfredo is a Ph.D. student of Biological Oceanography at Scripps Institution of Oceanography at UCSD. He has been collaborating with the Gulf of California Marine Program since 2011, mainly in databases administration, incorporation of oceanographic data to all our programs and the development of the web platform called DataMares. He specializes in the use of satellite images and time series analysis. Recently, he started developing a platform that will allow a better capture of fisheries data in the region.