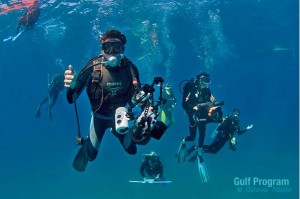 I have the honor of introducing the new Gulf of California Marine Program (GCMP) blog. We are part of the Scripps Institution of Oceanography (SIO), at the University of California San Diego, and are under the leadership of Dr. Exequiel Ezcurra from the University of California Riverside. The GCMP is a consortium of scientists devoted to generating research in the fields of taxonomy, coastal and marine ecology, population dynamics, fisheries, socioeconomics, and climate change. This initiative is focused on understanding the Gulf of California as a whole, single ecosystem that includes the people who live and work there. Our main goal is to synthesize new and existing knowledge, emphasize science, and map out sustainable development in the region.

The Gulf of California region (GOC) is considered one of the world’s biodiversity hotspots. Its coastal and marine ecosystems provide valuable services that sustain coastal communities and the regional economy. However, these ecosystems face significant pressures from fisheries, coastal development, unsustainable aquaculture, climate change, and other human-related stressors. Policy and management decisions are needed to reduce the negative impact of these threats; but to ensure these become long-lasting decisions they need to be supported by robust and objective science.

We believe that, as a group, we can develop and share robust methodologies to conduct research; we can offer effective scientific outreach products intended for multiple audiences and bridge connections to access high-level decision-makers. We also work towards generating regional scientific capacity through faculty members, research scientists, and students at SIO and other universities in Southern California and Mexico.

We want to use this blog as a means of sharing our science with you; we want to expedite communication between scientists and local communities, and with people from all other sectors; we want to make science fun and beautiful by sharing pictures and videos that explain how nature works. I hope you will join us in this new endeavor.

—
Author:
Octavio Aburto-Oropeza is a Postdoctoral Researcher at Scripps Institution of Oceanography (SIO), the 2010 recipient of the World Wildlife Fund (WWF) Kathryn Fuller Science for Nature Fund Fellowship, and a professional photographer associate with the International League of Conservation Photographers. Dr. Aburto-Oropeza obtained his PhD at the Center of Marine Biodiversity and Conservation at SIO, and was awarded the Jean Fort Award by the University of California, San Diego, for his significant contribution to an issue of public concern through his doctoral research. His research has focused on marine reserves and commercially exploited marine species and their fisheries in Mexico, Belize, Costa Rica, and the U.S.