We reached the high lands of the Sierra Madre Occidental, where the San Pedro Mezquital River begins its journey in search of the ocean. This River is formed by three main freshwater flows: la Sauceda, a stream that comes from the North, plus the Tunal and Santiago Bayacora, two torrents that come from the Sierra’s East side.

It was still dark when we arrived at the top of the mountains. The mist was covering the entire valley, but we could still make out the silhouettes of the pine trees covering the canyons and growing along the path that the River has carved in the Sierra. The sun started illuminating the back cliffs and almost two hours later it finally reached the River. We walked for a long time through one of the canyons until we reached the most internal, pristine part of this incredible place.

It was noon when we arrived to our destination. The sun was warming the entire place, but the shadows from the canopies of several conifer trees such as firs, pines, and oaks kept us cool as we explored this ecosystem. We flew the quadcopter, looked for underwater life, and photographed birds. We searched caves and took video of the water flows and were also able to capture how the light illuminated the cliffs as the day went by.

It wasn’t easy to reach the most intimate part of the San Pedro Mezquital River. However,if we don’t know this part of the story, we cannot understand how this River connects the different ecosystems in the Sierra with those along coast: although they are two worlds apart, they share one soul. 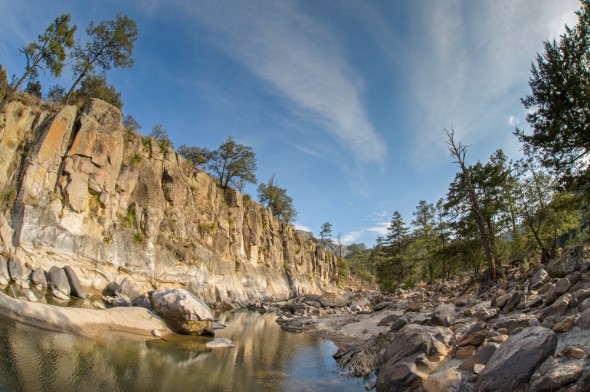