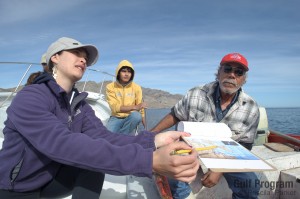 In June of the present year I obtained a Masters degree in Marine Biodiversity and Conservation from Scripps Institution of Oceanography. My research was focused in the Gulf of California Sardine Fishery (GCSF) and the challenges to its sustainability. The main objective of my research was to understand the ecological and social-cultural issues related to the GCSF.

The Gulf of California is a UNESCO world heritage site recognized for its high biodiversity and endemism (Roberts et al. 2002). Is one of the most productive marine ecosystems in the world and produces approximately 50% of Mexico’s total fishery catches. Among the different fisheries in Mexico, small pelagic fisheries constitute 25–40% of Mexico’s total national landings, and the Gulf provides, on average, over 70% of these landings (Cisneros-Mata et al. 1996, Sanchez- Velasco et al. 2000). According to worldwide trends, approximately 85% of the total catch of small pelagic fisheries is used for reduction to fishmeal, and a small percentage is packed in cans for sale into domestic and international markets. For instance, in 2006, 20–30 million tons of fish or 36.2% of the total world fisheries catch was destined primarily for conversion to fishmeal to feed pigs, chickens, and farmed fish.

Small pelagic fishes form the basis of many important coastal marine ecosystems. They are a fundamental food source for a variety of larger fish (many of them also of economic importance), marine mammals, and seabirds (Anderson and Gress 1984, Burger and Cooper 1984, Furness 1984, MacCall 1984, Furness and Barrett 1991, Furness and Nettleship 1991, Montevecchi and Berruti 1991, Velarde et al. 1994, Sanchez-Velasco et al. 2000). Fishing these species at conventional maximum sustainable yield levels (MSY) can have large impacts on other parts of the ecosystem, particularly when they constitute a high proportion of the biomass in the ecosystem or are highly connected in the food web (Smith et al. 2011).

Unfortunately the GCSF has been operating without a Fishing Management Plan, required by the Official Mexican Norm (NOM 003-PESC-1993). Even with the acknowledgement of fishery management limitations and scientific evidence of preceding collapses, in July 2011 the Marine Stewardship Council (1) , a non-governmental organization, certified the GCSF as sustainable. My interest thereof, was focused on the Midriff Island region of the central Gulf of California, specifically in two fishing communities: the permanently settled town of Bahia de Los Angeles and a temporary fishing camp at Las Animas Bay. There, 99% of GCSF total landings are reported (CONAPESCA 2010) and this region has a significant history of human-environmental interactions. Recent efforts for protecting the biodiversity of the midriff islands resulted in the creation of two primarily marine Federal Protected Areas: San Lorenzo Marine Archipelago National Park and Bahía de los Angeles, Canal de Ballenas y Salsipuedes Biosphere Reserve (Decreed on 2005 and 2007 respectively. CONANP)(2) .

In order to capture local fishermen’s perspectives about the Sustainability of the GCSF, I designed a questionnaire that consisted of sixteen open and closed types of questions. The questionnaire was strategically designed to capture important information regarding the sustainability of GCSF that was not considered in CONAPESCA databases or in the MSC certification criteria. The youngest fisherman interviewed was 21 years old and the oldest was 74, with an average age of 46 years. The majority of the fishers learned their trade from their fathers and grandfathers as well as from local fishers. More than half of fishers have been fishing for more than 20 years; some of them have been fishing for over 40 years. Fishers target different species depending on the season.

While interviewing and spending sometime with local fishers, one of them share with me a memory from his childhood when he used a shovel to pick up all the fish that had accumulated on shore due to the great abundance of the Gulf of California. ‘Nowadays the Gulf of California is still vast; when one species is scarce we can fish another different, nevertheless we know the resources are finite and we need to adopt more sustainable fishing practices’. 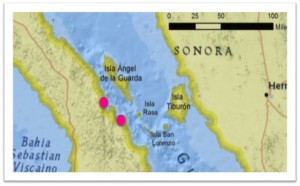 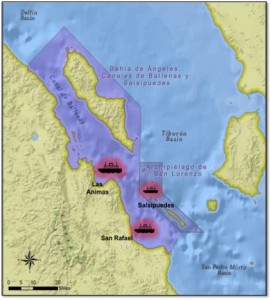 Fishing Sites. Sites where sardine vessels fish according to the fishermen interviewed

In conclusion, sardines play a key role in marine ecosystems; sustaining larger fish, marine mammals and seabirds. Therefore healthy stocks of sardines in the Midriff islands region are important for the endangered and protected species as: whale sharks, fin whales, California sea lions and sea turtles. Given the ecological significance of sardines in marine ecosystems, we should explore better and sustainable practices than converting an excellent source of protein and vitamins provided by fish such as sardines into a non-human consumption powder or fishmeal.

An improved design and implementation of an ecosystem-based fishery management plan as well as an awareness campaign are vital efforts for protecting the unique ecology of the Gulf of Mexico and for mitigating a catastrophic consummation of one of the most important resources for Mexico.

“Where knowledge is insufficient, robust and precautionary fishery management measures that favor the ecosystem should be adopted” (Pikitch. et al 2004).

Priscila Parker completed her master´s degree in 2012 in Marine Biodiversity and Conservation from Scripps Institution of Oceanography. Her research focused on Mexico’s Gulf of California Sardine Fishery and challenges to its sustainability. The main objective of her research was to understand the ecological and socio-cultural issues related to the Sardine Fishery. Currently she is pursuing her PhD at SIO and she collaborates in Natural Numbers Project.