A month ago, I had the chance to attend the AFS meeting in Mazatlán, México. This has been a busy time as I sprint to finish my PhD degree, ponder what comes next, and deal with the prospect of becoming a dad (just a few months to go). However, I couldn’t pass up the chance to collaborate with an amazing group of researchers from various institutions with a truly interdisciplinary view (http://gocmarineprogram.org/) in a symposium on the status of rocky reefs in the Gulf of California.

It is very exciting for graduate students abroad (such as myself) to go home and see a shared passion among other scientists, whatever their specific discipline, to address and solve issues around marine conservation and sustainability[1]. I learned, or was reminded of, the importance of identifying what and where the key issues are, and of looking to the past to understand the present and plan for the future. I also reaffirmed my belief that positive actions can take time, and require a commitment to working with non-scientists to meet goals as a community, with future generations included.

A recurring theme during the symposium, which included a wonderful short video, was the experience of Cabo Pulmo, Baja California Sur. Being from the region, and having a marine science background, I was well aware of it as a place where scientists, fishers, and ultimately government agencies, had collaborated to establish a no-take marine protected area, turning instead to ecotourism as an economic activity for the (small) local population. However, I had never made the time to visit and dive there, despite reading and hearing about the outcomes of management policies.

A week ago, my wife convinced me to take a ‘baby-moon’, as it is apparently called, and we settled on a road trip through Baja, where we could get away from the city but be familiar enough with the area to stay safe in terms of mom and baby. After my recent experience at the symposium, Cabo Pulmo was a must.

Over 20 years ago, I was introduced to the underwater world in earnest when my dad started teaching me to snorkel and spearfish in Guaymas, on the Sonora coast of the Gulf of California. I can readily attest to a decrease in the number of fish there over time (in which I’ll admit to playing a part), but what we saw in Cabo Pulmo rivaled even my earliest memories in terms of the abundance and diversity of life underwater. Those with experience diving there will no doubt think me late to the party but, as someone who has spent most of their life exploring the Gulf of California, the immense schools of jacks, unafraid groupers, snappers and parrotfishes, and silent circling of bull sharks were as much impressive as they were bewildering. I’ve seen at least a hundred similar coastlines around the Gulf; where did all the other fish go? I guess, as Daniel Pauly would say, “we ate them all.”

Beyond jarring my clearly shifted baseline, Cabo Pulmo and other places where science-based policies (not only including MPAs) have worked, make me optimistic. Despite the long road ahead, it is clear that there are ever more people concerned with the conservation of our natural resources, and receptive to protecting some places while fishing responsibly in others. In places like Cabo Pulmo, the sometimes-iffy promise of ecotourism from conservation has indeed paid off. Thus, given the right settings, we really can have our fish and eat them too. The challenge ahead will be building on these still-small endeavors for regional and global solutions.

As I accompanied my wife snorkeling, I couldn’t help but glance at her belly. One day soon, we’ll come back and our daughter will be able to see a place where positive actions have turned back time and her baseline will be in a better place than mine. 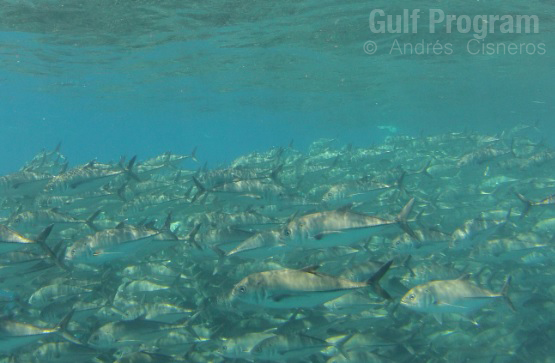 A large school of jacks wanders around a small reef. 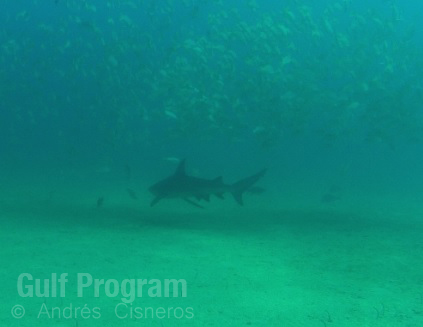 One of over a dozen bull sharks (we could see) glides under a school of yellow-tailed snapper. No night diving allowed, that’s feeding time. 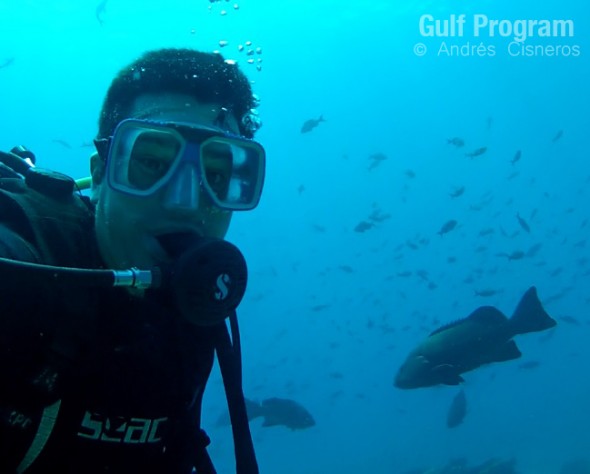 Selfie with a grouper. 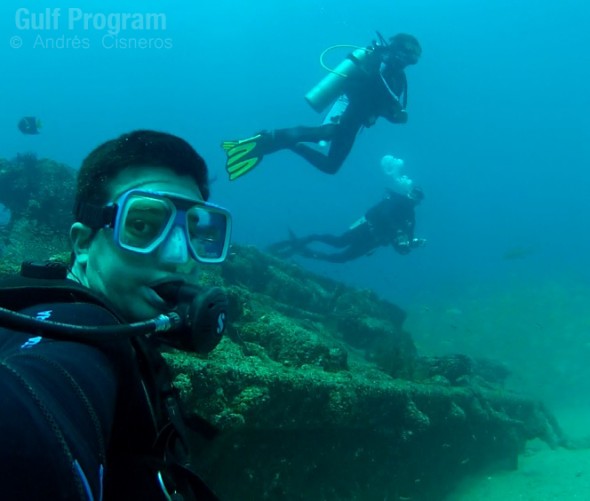 Doesn’t get much better than diving with only two local dive guides. It helps to have friends who work at the shop.

Andrés Cisneros-Montemayor is a PhD candidate in Resource Management and Environmental Studies at the University of British Columbia. He works with the Fisheries Economics Research Unit at the UBC Fisheries Centre, specializing in applied natural resource economics with a focus on marine ecosystems. These studies apply novel theoretical models to real-world settings, both in developing and developed regions including Argentina (Patagonia), Belize, Canada, Central America, East Asia, Mexico, the US and West Africa. Andrés holds a BSc in Marine Biology and an MSc in Fisheries Economics.