For the past five years, researchers at SIO and CBMC have been partnering with local fishermen in El Golfo de Santa Clara to understand the biology of the Gulf corvina, a large marine fish that supports one of the most important fisheries for the local community. Specifically, we have been working together to understand the behavioral dynamics of the millions of corvina that migrate into the estuary of the Colorado River Delta each spring to spawn in massive aggregations, because the annual occurrence of this amazing event represents the lifeline of the fishery. If these aggregations disappear, the fishery and the socio-economic benefits it provides to the community will disappear along with them. So, the more we understand about the spawning behavior of corvina, the better we will be able to manage these aggregations to support a healthy and sustainable fishery for many years to come.

Gulf corvina are members of a family of fishes commonly referred to as croakers and drums, an appropriate name for fishes that make croaking and drumming sounds during spawning and other social activities. These sounds are produced through contractions of sonic musculature to resonate low-frequency sound off their gas bladders. Usually, only males produce the characteristic sounds, since females usually lack the sonic musculature. It is believed that corvinas and other croakers generate sounds to communicate spawning readiness, coordinate the formation of spawning aggregations, and synchronize courtship and spawning.

The sounds can be very loud, and as fishers from El Golfo know, you can sometimes hear them through the hulls of boats, or even through man-made structures like seawalls.

Check out this link to a NY Times article  to learn more about fish sounds and just how loud they can be.

During the week of the new moon in April, three of us from SIO headed down to El Golfo from San Diego to meet up with the CBMC team (who were surveying the small corvinas – see previous blog) and to begin recording the sounds of corvina.  Our goal was to gather a repertoire of sound data that we could associate with the spawning cycle. For example, we were fairly certain based on our previous research (and because fishermen tell us!), that the corvina spawn on the outgoing tide that happens in the afternoon or evening. So, our hypothesis was that croaking sounds would be the most intense during that period.  As it turns out, our hypothesis was correct….

During two consecutive days, our 3-person team (myself, Simon Freeman, and Lauren Freeman) worked with Captain José Angel Montes Zamudio and his team of expert fishermen from El Golfo to record the sounds, and the results were the same on both days. We launched the panga in the morning (after a nice breakfast at Dinora’s restaurant of course), and then sampled all throughout the morning and afternoon. For the first few hours, the water was relatively quiet. You could hear the sounds of some corvinas croaking, as well as other species of croakers of which we don’t yet know the species. However, as the tide began to rise and high tide approached, the fleet of cucapa fishing boats quickly began to organize and line themselves up in the channel. By the time high tide hit around mid-day, pangas were strung continuously along the channels for about a mile, and when the tide began to drop, all the action started.

Within minutes, boats to the south of us start throwing in their nets and racing around the channels, and we soon learned why. All of a sudden, the boat began to vibrate and we started to hear a low humming sound through the hull of the boat. With each passing minute, the humming became louder and louder, until eventually it sounded like the biggest  swarm of bees you’ve ever heard. The captain signaled to us that the corvina were spawning right under us. It was truly amazing. The sound was literally so loud at times, that I had to shout to talk to the rest of the team.

Here is a clip of what the spawning corvina sound like. Imagine there are tens of thousands (or maybe millions) of corvinas making these sounds!

Here is a clip where you can here an individual corvina croaking  as well as the sounds of the larger aggregation. If you listen carefully, you’ll hear a rumble sound, which is when the corvina ran into the hydrophone.

As you can see, we gathered lots of great data on the spawning sounds of corvina. Next year, we plan to ramp up the project quite a bit. Our goal is to compare the volume of sound produced by these fish with the abundance of fish that are present in the area. To do that, we will use the hydrophones again to record the fish and multi-beam sonar to estimate the biomass of fish present. It should be exciting, so stay tuned! 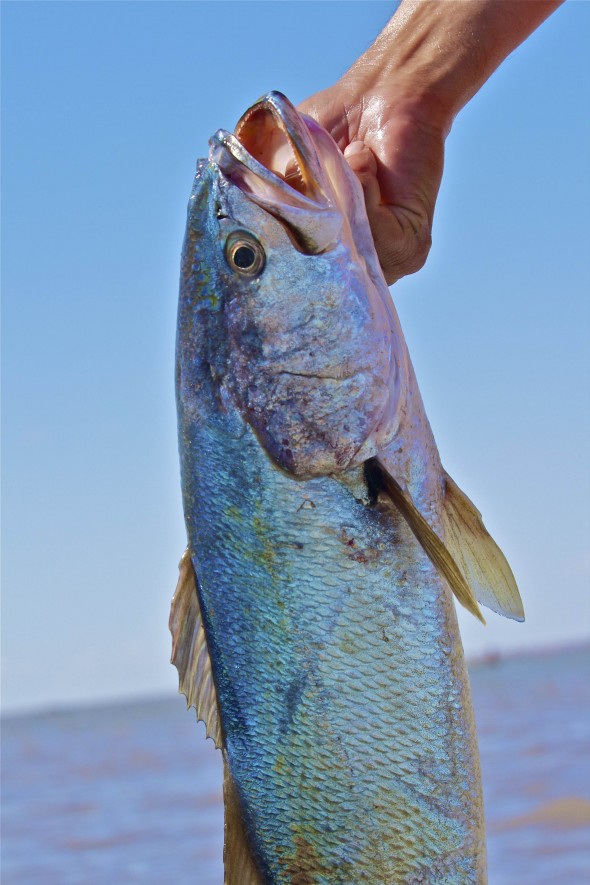 Gulf corvina showing its brilliant spawning colors. This fish was grabbed by the fishermen as it was floating by. Due to the sheer volume of fish being caught from the aggregations, sometimes fish fall out of the nets when fishers retrieve them. In this case, it provided a great photo opportunity. Photo by Simon Freeman.

Simon monitors the spawning sounds with his laptop while Lauren takes photos of fishers catching corvinas around the boat to provide evidence that the source of the sounds are corvina.

Brad Erisman. Research Scientist, Scripps Institution of Oceanography (UCSD). Dr. Erisman has been studying the biology and fisheries of reef fishes from southern and Baja California for over 13 years. He leads several projects related to the conservation and management of fish spawning aggregations in the Gulf of California, is a member of the Species Survival Commission for the International Union for the Conservation of Nature (IUCN), and is a board member of the Society for the Conservation of Reef Fish Aggregations (SCRFA).