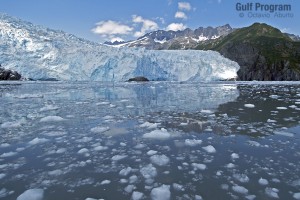 In 1989, Bill McKibben published The End of Nature, with the general premise that nature is something untouched by humanity and that it no longer exists. His argument was based on the simple fact that the entire planet is in constant contact with the atmosphere, which we have altered significantly since the dawn of civilization, and is therefore “touched” – almost literally – by humanity. That climate change is truly global and therefore effects everything. But some might argue that The End does not apply to the ocean. Why? Well, the ocean is big. REALLY big. It covers more than 70% of the planet’s surface and includes well over 90% of the inhabitable space. In fact, about two thirds of the planet is covered by water that is at least two miles deep. And we don’t really live on it; or in it. How could we possibly have touched every part of it? Even if the atmosphere is altered everywhere, does that really effect such a big ocean? Does climate change lead to ocean change, or is it mostly a problem for glaciers, ice caps, and mountain tops?

In order to answer those questions and understand how our “atmospheric actions” affect the ocean, scientists around the world – including here at Scripps Institution of Oceanography – study the interactions between the ocean and the air that sits on top of it. Through large, international collaborations and after many decades of studying the ocean so intensely, we have learned a lot. Yes, the ocean is big, and yes it is deep; in fact, the water at the bottom of the ocean is very old. How can water be old? Well, oceanographers describe water that is in contact with the atmosphere as being zero days (or years) old because water changes when it interacts with the air and is therefore new. As water travels through the ocean, deeper than the surface layer, it ages. Scientists make this distinction because many things happen at the ocean’s surface. Particles fall into it; gases dissolve into it; heat is absorbed (or released) by it; water evaporates out of it; rain falls into it. There are many interactions between the atmosphere and the ocean. Multiply that by all of the different types of gases and all of the different types of particles and all of the differing amounts of rain, sunlight, heat, etc., and it is easy to see how changes to the atmosphere lead to changes in the ocean; especially the young, surface ocean.

One of the biggest changes to nature discussed in The End of Nature is the increased atmospheric concentration of carbon dioxide (CO2), a gas that we release when we use electricity, cut down forests, build cities, and drive our cars. CO2 traps heat, warming some parts of the atmosphere, and generally changing the climate. And as discussed above, it also dissolves into the surface ocean. Without the ocean, all of the anthropogenic CO2 would stay in the atmosphere, further altering the climate. Also, some of the heat trapped by the CO2 that does remain in the atmosphere is absorbed by the surface ocean. Without the ocean, there would be a lot more heat and a lot more CO2 in the atmosphere, changing the climate (and all of the natural and human systems on the planet), much more quickly. The ocean buffers our human activities! But that buffering comes with a cost. Increased absorbed heat changes ocean physics, and increased dissolved CO2 changes ocean chemistry, and the physics and chemistry of the ocean are changing more rapidly than any time in the last several dozen million years! And these changes come with even more consequences to the biology, the plants and animals that we care about. [More on changing biology in general and the topics within ocean change biology that we study at GCMP in a later post]

Is Bill McKibben right? Is nature truly gone, even in the ocean? The answer for the surface ocean is unfortunately a clear yes. Absorption of our gases and our heat (along with many of our direct marine activities) has touched all parts of the surface ocean and any other part of it that has been near the surface recently. But the good news may come from the old ocean. I never mentioned just how old the water in the deep ocean can be. In some places it can be as much as several thousand years old. Several thousand years have passed since the last time that water mixed up to the surface. The most aggressive changes to the atmosphere that are a result of our activities have been occurring for the last few hundred years, and even agriculture/civilization as we know it is not much older than the oldest ocean water. So maybe nature does still exist in some deep parts of the ocean(!), if there are places where we still haven’t fished AND we still haven’t accidentally (or purposely) dropped garbage AND we still haven’t accidentally (or purposely) introduced new species AND that are old enough to be unaffected by our activities in the atmosphere. Maybe. But maybe not. And even if nature still is out there, it’s at the bottom of the ocean under several miles of (literally) freezing cold water, in the pitch dark, where we will never go, never swim, never see. And that’s too bad. 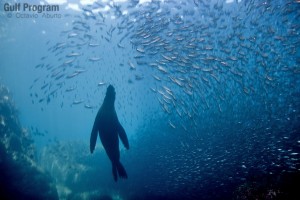