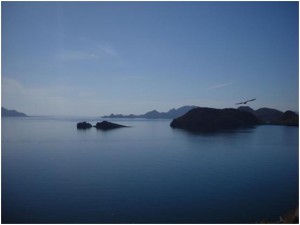 Marine protected areas (MPAs) have been getting a lot of attention lately from scientists, conservation groups, and governments. The success of no-take reserves (where no extractive practices are allowed) to rebuild fish populations and allow for recovery of ecosystems has made them of great interest to people involved in marine conservation. One very important issue with MPAs is trying to balance conservation needs with local fisheries. Most (many) fishers are against no-take reserves because they’re not allowed to fish there and do not know the benefits that no-take zones can have for their fisheries.

This issue – MPAs as a fishery management tool – was the focus of my capstone (mini-thesis) for my master’s degree in Marine Conservation and Biodiversity from SIO. I evaluated Loreto Bay National Park, one of the oldest and largest MPAs in the Gulf. Loreto Bay National Park (like all other MPAs in the Gulf apart from Cabo Pulmo) is multi-use with a very small no-take area (less than 1% of the total park area). In an attempt to quiet the concerns of fishers at not being allowed to fish in areas, fishing activities are zoned – there are some areas where no fishing is allowed at all, others where certain gear types are not permitted, and some that are essentially “open acess” to small-scale fishers within the Loreto region who hold fishing permits. 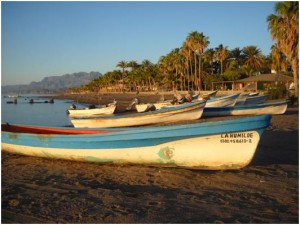 Evaluating the success of an MPA as a fisheries management tool is not as straightforward as one would think; not only is it necessary to look at fisheries capture and biological data, one must also consider more socio-economic and political factors about the MPA: What is the governance framework within the park? Do fishers agree (and/or comply) with the rules? Can they make a living under the current regulations? To answer these questions, I analyzed long-term biological monitoring data that the Gulf Program has been collecting since 1998 as well as official capture records. I also interviewed fishers in Loreto and government representatives to get a better idea of what fishers’ perspectives about MPA and management are as well as how the government sees the day-to-day management.

The picture that my research paints is (to the surprise of no one) complicated. Fish biomass is stable, but representative of an overfished system. Capture seems to be falling. Fishers say they like the park because it keeps trawlers and purse seiners out, but they don’t like the additional regulations. Government agencies are underfunded and understaffed, but have many outreach programs to work with stakeholder groups.

To interpret these results into something clear (e.g. “LBNP is or is not a success”) is not possible. Biologically-speaking, we hope to see more – to see some sign that protection has worked. The Mexican Fisheries Agency’s (CONAPESCA) database of capture is of too poor quality to identify catch-per-unit-effort data or to anticipate collapses. We also cannot know the level of recreational fishing taking place in the park, which definitely has some effect on fish stocks. Overlaps in jurisdications make management difficult. These are negative things, but there are positives as well: the fishing community seems to be onboard with conservation efforts, thanks in large part to NGO efforts. There is a growing sustainability ethic and realization that conservation needs to be done -and that Loreto’s MPA can be useful in providing for a sustainable future.

Alexis Rife is a recent graduate from the MAS program in Marine Conservation and Biodiversity from SIO. This project is one step in a wider goal of the Gulf Program to evaluate marine protected areas throughout the Gulf of California and develop a model that can be implemented in other regions. In February, she will be moving to Washington, D.C. to being a Knauss Fellowship in marine policy.